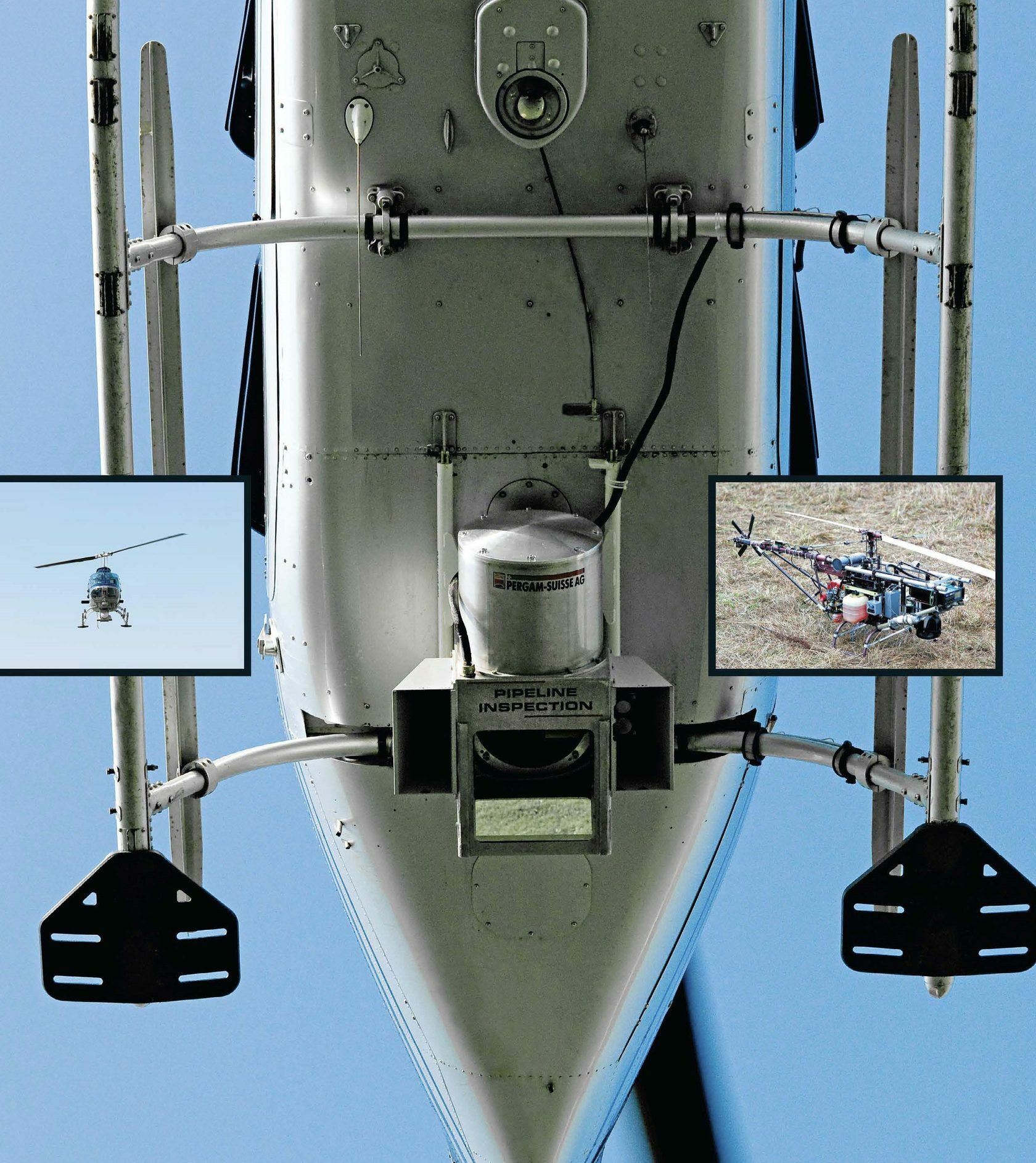 An overview of gas leak detection technologies, inspection procedures, and the future for methane assessment with aerial platforms.

Gas leaks can present an incalculable risk for operating companies. Leaks can lead to accidents; the escaping gas is an expensive loss; and lost gas often severely harms the environment. In addition to simply finding leaks, pipeline operators must identify possible threats as soon as possible, before they present a real risk. Pipelines are one of gas transport companies' most important assets and certainly their most safety-sensitive.

Gas transport companies have a variety of choices concerning pipeline inspections. Aerial surveys are considered state-of-the-art and are often used in addition to walking surveys with traditional gas sensors. While these walking surveys deliver reliable results, they are time consuming. Documentation is sometimes still recorded with a highlighter on paper maps, and the walking procedure carries a high risk for occupational accidents. Smart aerial gas leak detection technologies that include measurement of gas concentration and recording capabilities are sustainably gaining ground.

Dead or brown vegetation that has been starved of oxygen is a reliable sign of a gas leak. This indicator is relied on during conventional visual inspection where an inspector observes the corridor, typically from a helicopter or a plane. This procedure becomes diagnostic and more sensitive and comprehensive by including a gas leak detection system in the helicopter. Gas leaks that rise only a few parts per million (ppm) can then be detected reliably above ground and on buried pipelines.


In addition to detecting leaks earlier, this technology allows the corridor to be filmed during the same flight. A representative of one of the largest gas grid operators in the United States confirms: «This detailed reporting tool became an important component of our inspection efforts and provided us with valuable historical data. Yearly inspection was implemented in our pro-active inspection program. Leak data was shared with our integrity management group. The right-of-way video [ROW] was enormously important to our encroachment control department.» In fact, a video documentation of the ROW is now an invaluable instrument for identifying erosion, landslides, or external threats such as excavator works well in advance.

IN ADDITION TO DETECTING METHANE LEAKS EARLIER, NEW TECHNOLOGY ALLOWS THE CORRIDOR TO BE FILMED DURING THE SAME FliGHT.

One concept suctions air samples, allowing a multi-pass system to detect the smallest amounts of gas. The sensitivity of this system is high, but the helicopter must fly at a very low altitude to obtain the air samples. This flight altitude is dangerous from a safety point of view and isn't considered acceptable by many grid operators. Capturing footage and other data is difficult at this altitude, so this concept is mainly limited to performing the leak survey.

Another procedure uses the absorption of gases at different wavelengths and is based on reflected sun light. While several gases can be detected, this system depends on precise weather conditions. Multiple research projects are currently testing this approach, and interesting results may be expected within the next few years.

THIS LASER TECHNOLOGY IS USED MAINLY FOR TRANSMISSION, DISTRIBUTION, AND GATHERING LINES; IT IS ALSO ADAPTED FOR SPE­CIAL APPLICATIONS SUCH AS PRESSURE TESTS OR LANDFILL MONITORING.

The most frequently used model is aerial laser methane assessment (ALMA), performed with a laser in the spectral range where methane has a high absorption (around 1,650 nm). A laser beam is emitted from the equipment on the helicopter and hits the ground, either on soil, grass, concrete, asphalt, or directly on the pipeline. The laser light is reflected back to the unit, and the system uses the scattered signal to determine how much of the laser energy was absorbed. A complex and patented algorithm calculates the total methane content along the laser light path from the helicopter to the surface. This concept has also been proven to work at higher flight levels where the helicopter flies at approximately 500 feet.

This narrow spectral range helps avoid false readings from other gases so that only methane is indicated. Leaks above the set threshold trigger an alarm in real time, and the grid operator located on the ground is notified immediately.

Data can be post-processed to categorize the findings and to generate reports specifically tailored to the needs of the network operator. An experienced field engineer with an understanding of the correlation between reflected laser light, radiation from the environment, and the signal is necessary for reliable reporting. False signal readings can't be avoided completely but can be recognized during the detailed post-processing. The higher the threshold (regulated by the grid operator) set, the fewer false readings occur. The usual threshold is around 150 ppm x m, even though leaks smaller than 25 ppm x m are able to be detected with this technology.

Leaks below the threshold might necessitate a repair at a gas meter but usually not at a transmission pipeline. This will depend on the individual customer's directed inspection and maintenance (Dl&M) program. The leaks indicated from the aerial system are commonly verified with a second method, usually with combustible gas indicators.

Then the repair process can be scheduled. Wind conditions, flight level, temperature and sun exposure, slope, and the ground surface that reflects the laser can all affect the sensitivity of the system, but extensive field tests have proven that under almost every circumstance satisfactory results are achieved.

Currently this laser technology is used mainly for transmission, distribution, and gathering lines. It is also adapted for special applications such as pressure tests or landfill monitoring. In the first phase, the operator specifies the scope of the inspection and provides three-dimensional shape files when available. He or she sets the best time for the inspection, excluding the times of the year with extreme temperatures and severe weather conditions. He decides if an on-board inspector will complete the classic visual inspection concurrently with data capturing.

With the addition of the shape files, the inspection and flight planning can begin. Carefully planned inspections save on dead head flights for re-fuelling and ferry flights between the lines. The inspection can be performed autonomously, depending on the availability of the helicopter, the crew, and weather conditions.

A pre-report with the major leaks and all detected activities in the ROW is provided daily. The final report with the flown track, the gas concentration values over the pipeline, a record of leaks along with their precise location, and a complete video documentation of the ROW are provided within a couple of days of inspection.

The inspection includes a follow-up meeting to discuss the data and to determinate the inspection cycle. If there are no major incidents, this kind of patrol is typically completed every 6 to 12 months. Following a severe winter season more leaks are often identifiable; welds are especially predisposed for weak spots. It is recommended a survey be performed in the most safety-sensitive areas as soon as the snow has melted.

The ALMA system was developed in 2002 in Switzerland for Russia's largest natural gas transport company to locate leaks and to simultaneously detect security threats.

"Demand from international grid operators for such a concept encouraged us to develop ALMA. The technology has been proven. Now we are designing certified mounts for a variety of helicopters and streamlining the production process."

In the interim, the system's third generation is commercially available and is currently successfully used in more than 24 countries. The main benefit of this technology is safety during the inspection, both for the crew and for the pipeline. This method also offers independence from most weather conditions. Only heavy rain, snow, or ice limits the system. (Faced with these conditions VFR flights are inappropriate anyway.) Limitations of this technology are mainly related to flight restrictions in densely populated areas. In these cases ground vehicles can be fitted with the same laser technology.

Three cameras document the entire 300-foot right of way during an inspection flight The data is stored on a geospatial digital video recorder and may be integrated in other third-party video mapping software platfonns.

THE TECHNOLOGY HAS BEEN PROVEN. NOW WE ARE DESIGNING CERTIFIED MOUNTS FOR A VARIETY OF HELICOPTERS AND STREAMLINING THE PRODUCTION PROCESS.

A current R&D project integrates laser technology in a UAV (unmanned aerial vehicle) for enhanced financial viability. Target applications are inspections of shorter lines that are currently checked by ground or mapping of zoned areas such as landfills. The first flight tests were performed successfully, but some regulations and insurance uncertainties must be clarified before the solution can be launched officially.

With good reason, more utilities rely on these kinds of inspections. Considering the costs related to a "smart aerial inspection" that includes additional technology, it is only a few percentage points above the cost of a typical inspection flight. Engineering, operations, GIS/mapping, and even planning departments can take advantage of the data provided and sometimes share the expense of an inspection. The trend towards this technology will most certainly continue.