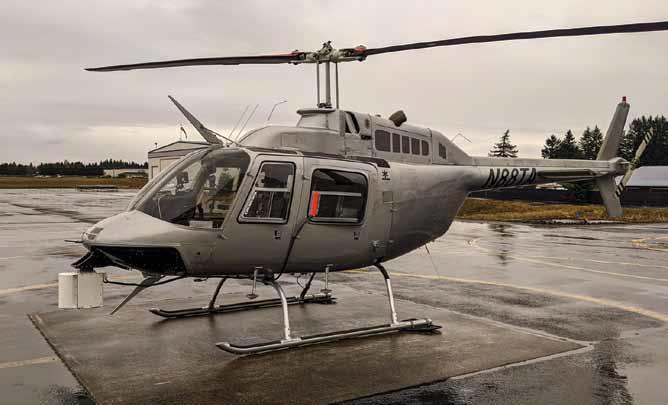 An important part of the technological field of industrialized countries is the pipeline transport of crude hydrocarbons. A significant share of this transport is made up of the natural gas pipeline system, which also includes various process facilities. The total length of field, trunk and distribution pipelines in Russia exceeds 1 million kilometers.

Gas pipelines are subject to constant impact of both natural (changes in the temperature of soil and groundwater, flooding) and mechanical factors (changes in pipe pressure and seasonal soil movements). This results in premature corrosion up to the gas pipeline destruction, which ultimately leads to gas leaks. This involves both gas loss and formation of an explosive gas-air mixture potentially leading to gas pipeline accidents. Elimination of even a minor gas leak prevents further gas pipeline destruction. Therefore, timely detection of gas leaks is an important part of pipeline inspection.

Remote gas leak detection by airborne optical methods has many advantages over other diagnostic methods. First of all, due to its responsiveness.

Pergam has been developing and manufacturing airborne laser methane detectors (hereinafter referred to as the ‘Detectors') since 2003. In Russia and the CIS countries, these devices are called DLS-Pergam, and ALMA (Airborne Laser Methane Assessment) in other countries. Currently, more than 50 devices of this type are successfully used in Russia and in other countries for the assessment of underground gas pipelines from various aircraft, mainly helicopters.

Based on the Detector operating experience, up to 500 km of a gas pipeline can be examined in a working day with a full report on the diagnostic results.

The Detector operating principle is based on laser spectroscopy and is shown in Fig. 1. A diode laser emits in a pulsed mode with a pulse duration of about 100 μs at a wavelength of 1.65 μm where methane has several absorption lines.
1 — receiving mirror;2 — photodetector;3 — laser;4 — objective lens;5 — beam splitter;6 — reference channel of the instrument.

Laser emission is reflected by a topographic object (ground, grass, forest, etc.), then goes to a receiving parabolic mirror and is focused on a photodetector. Special online software controls the laser and processes data. The laser radiation wavelength is scanned in each pulse near the methane absorption line. Thus, the air absorption spectrum is measured in a narrow spectral range. The result of data processing is a calculated methane concentration along the length of the laser optical path from the instrument to a topographic object.

The results of methane concentration measurement are shown on the monitor screen as a chart (real-time). All data is recorded in computer memory for further processing and automatic report generation.

In case of gas leak from pipelines, a cloud of methane is formed with non-even methane concentration distribution. The instrument’s built-in GPS system provides spatial distribution of methane in the vicinity of leak location with a reference to coordinates. The trajectory and points of recorded leaks are displayed on electronic maps in the generated survey report.

The device has a video recording system with 2 to 4 cameras in various Detector versions. The operator receives the camera image online, which is very convenient for flight routing. The recorded pipeline inspection video provides additional information about the gas pipeline condition, as well as photos of the detected gas leak points.

For 16 years, the engineers of Pergam have been continuously working on the improvement of instruments in order to improve metrological parameters (primarily sensitivity and speed) and convenience of the user interface of both the online software and the report generation software. The latest Detector model is the ALMA G4 (Generation 4) instrument. This instrument was designed specifically for small aircraft that are much more economical when inspecting gas pipelines compared to large helicopters such as MI-24. Its mass-dimensional parameters are much smaller compared to previous Detector models. Overall dimensions of the optical unit are 300×280×340 mm, weight is 5 kg, and the electronics unit with a computer weighs 8 kg. This model utilizes a new type of diode laser and additionally a laser radiation power amplifier.

Despite a relatively high output power, this radiation still belongs to class 1 (safe for eyes) at distances greater than 2 meters from the instrument.

The new Detector modification utilizes digital-to-analog electronics with an increased digitization frequency and a more powerful computer. This allowed reducing the minimum leak detection time down to 0.03 seconds.

Now it has become possible to survey gas pipelines on such small aircraft as Cessna or Diamond (DA-42) at a speed of 150 km/h, which is an acceptable safe flight speed of aircraft.

The increased laser output and low-noise electronics of the ALMA G4 detector improved the gas detection threshold sensitivity. It is 5 ppm*m at the altitude of 30 meters (the altitude of the best sensitivity).

At the same time, even at the altitude of 150 meters, the instrument threshold sensitivity is 80 ppm*m, which is sufficient to detect even slight gas leaks.

(Note: ppm is part per million, one millionth of the volumetric methane concentration. 5 ppm*m corresponds to 0.0005 LEL*m, and 80 ppm*m to 0.008 LEL*m.)As to the online instrument control software, its modified version has an improved user interface and an advanced photodetector signal processing tool. The software includes such additional mathematical procedures as correlation functions of analytical and reference signals. This made it possible to virtually eliminate false positives, which, in its turn, will save time and money when confirming the gas pipeline inspection results.

ALMA G4 has been successfully tested on various aircraft types in Germany, the USA, Russia, and Kazakhstan. At present, Pergam has organized a small-scale production of such methane detectors.

Figures 2 and 3 show ALMA G4 installation examples on a Cessna aircraft and on a Jet Ranger helicopter.

Fig. 4 shows an example of a gas pipeline survey map (from a helicopter) in Ryazan Region. The map shows the flight path of the helicopter with ALMA G4. The path has 3 points of recorded gas leaks marked in different colors depending on the measured gas concentration.
Another upgrade of ALMA G4 remote gas detector is the use of a laser beam scanning system. As a result, the laser beam circumscribes a circle on a topographic target.

When using this scanning system on an aircraft, when surveying gas pipelines, the laser beam path takes the shape shown in Fig. 5.


This laser beam path is obtained at the altitude of 100 meters at an aircraft speed of 100 km/h. This figure shows that the full survey area width with the given parameters is 25 m.